In search of Tacos, Horchatas, and Big, Bold flavors
Celebrate Cinco de Mayo on the Road

Most of us are pretty OK with Americanized Mexican fare. We like our gringo joints with hand-crafted $8 margaritas and grilled mahi-mahi tacos with some fresh lime squeezed on top. But some adventurous eaters — like local photographer Paul Cheney — want the real thing. They want tacos stuffed with tongue or head meat, and they aren’t afraid to head to the grubbiest, most rundown joint in the seediest strip mall they can find, wander inside, point to one of the locals eating something unrecognizable and say, “I’ll have one of those.”

I can’t say I’m one of those people, but then Cheney starting tagging me on amazing food photos via Facebook. One day, it’d be a glorious plate of tacos garnished with crispy radish slices and leafy cilantro sprigs. The next, it’d be a deep bowl of pho swimming with firm bean sprouts, fragrant basil, and purple hoisin. The food porn was unbelievable, so I asked him what he was working on. Was this an assignment for a publication? He told me it was his own interest that propelled him to the outer reaches of town in search of authentic ethnic fare. I figured we were a match made in foodie heaven.

On his travels, he stumbled upon a German restaurant in Goose Creek, a Vietnamese spot on Rivers Avenue, and a host of taquerias sprinkled throughout the northern ‘burbs. For the purpose of this piece, we’re focusing on the taquerias because a great way to celebrate Cinco de Mayo is to take to the road and chart your own adventure — far away from the Corona-chugging crowds. I did just that last week, following in Cheney’s footsteps for an impromptu taco trek on which my father and daughter shared a lengua (tongue) taco, and my vegetarian niece ate her very first torta (hold the meat). Unfortunately, we never got to drink a margarita. Indeed, none of these places have a full liquor license and some don’t even have a beer and wine license. So be prepared to wash down the hottest hot sauce you’ve ever had with some virgin agua frescas and horchatas.

La Norteña requires no leap of faith. It’s a long-time favorite of North Charlestonians and smart downtowners willing to drive the extra mile for authentic Mexican fare. Get the horchata, which tastes like cinnamon-and-vanilla flavored milk. Paul typically orders a taco al pastor and horchata to see how they compare to other restaurants. La Norteña excels at both. This is the first place he tried lengua tacos and started to dip his toes into the deeper end of ethnic fare. The staff is awesome, and on Friday nights Gino Castillo bangs out beats while patrons watch fútbol on TV. The tacos are damn good, but the menu has a breadth of variety you won’t see elsewhere. From octopus appetizers to Veracruz-style fish, the menu is a broad sampling of regional Mexican food, making it very difficult to order. Our suggestion: be adventurous. Go off the grid. Order something you’ve never had before and see what you think. A rib-eye cooked with mushrooms and onions and topped with cheese dip might be the most awesome thing you’ve ever eaten. La Norteña has a full bar with both house and Texana margaritas made with Cuervo. They also have quite a selection of tequila shooters, if that’s how you roll.

The specialty of the house at Pollo Tropical is the charcoal-grilled chicken, but the tacos are great too

OK, so Pollo Tropical wasn’t on Paul’s original list, but it was the first stop on my taco trek because, even though I hadn’t been there in a year or so, I remembered that it had some of the best grilled chicken I’d ever had. And it still does. They specialize in a variety of Peruvian and Colombian cuisine, with ceviche, whole charcoal-grilled chickens, ribs, and the like, but they also have quite a selection of quality Mexican fare. The menu is packed with tortas (sandwiches), tacos, and huaraches (a flat, oval fried corn masa base topped with beans, meat, queso, and lettuce). We tried a smattering of dishes and even braved the lengua taco, which was most loved by the 9-year-old in the group. Unfortunately, they don’t have a frozen margarita machine, but they do have plenty of Mexican beer (Dos Equis, Modelo, Pacifico, Corona) to put out the fire in your mouth — and your mouth will be on fire because the secret hot sauce on the table is insanely good (and spicy). We highly recommend pairing it with the fried plantains for a sweet-and-hot explosion.

Paul discovered Rosaly’s Taqueria one day in the beleaguered Charleston Heights neighborhood. He stuck with his typical order of an al pastor and two steak tacos, which were served with crispy red radishes and a glass of horchata. Rosaly’s is a nice little taqueria, but what really makes it special is the service. It’s practically Peninsula Grill-style for $2 tacos. The place is run by a family, with the teenaged son proving to be one of the best waiters we’ve ever had. The dad (and cook) comes out to check on each diner’s satisfaction, taking visible pride in nods of affirmation. The menu can be difficult to navigate, and don’t let the photos deter you from ordering the enchiladas or burritos. They look much better in person. Our waiter said the “big plate” ($13.99) was the way to go, but surf and turf seemed way too much to eat in one sitting. Shrimp, steak, chicken, and guacamole? Too much. 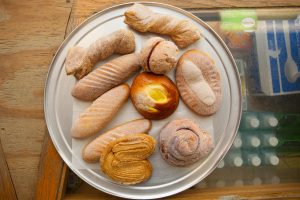 The Mexican specialties at Tlaxcalita Bakery are fresh and sweet

Tlaxcalita Panaderia is both a bakery and a store (tienda) with a variety of grocery items and freshly baked breads. A pastry case is stacked with trays and trays of pastries, puffs, and snacks. The baker will direct you to some of the specialties; pig ears, elotes, and something that looked like golf balls with jelly inside. They also have housemade flan and tres leche cake slices.
El Chapin Centro Americano Restaurant
1262 Remount Road
North Charleston
(843) 529-3376

The Guatemalan pork plate at El Chapin Centro Americano is big and filling and only $8.95

El Chapin serves more than just Mexican fare. Here, Paul ordered familiar items like horchata, taco al pastor, a steak quesadilla (per his server’s suggestion), and pointed at the pupusa on the menu, afraid to mispronounce it and get slapped. While the tacos and quesadillas are excellent, the pupusas are the big discovery here. The handmade tortillas come stuffed with pork, beans, and cheese. They’re incredible, like small Mexican pizzas but completely different.
La Delicia Deli y Grocery
129 Saint James Ave.
Goose Creek

A typical nondescript strip mall restaurant that’s half tienda and half restaurant, La Delicia is a gem where not much English is spoken. The restaurant’s style is part Honduran and part Mexican. The Tacos Dorados, also known as flautas, come with a mix of chicken, beef, and al pastor. A huge platter comes with five lightly fried tacos under a mountain of cabbage covered in a tomato sauce, thinly sliced tomatoes, and a queso fresco (fresh farmer’s cheese). Delicioso.

Paul E. Cheney, Jr./jwkpec.com
A plate of tacos at Los Parados with accompanying hot sauces and a pitcher of agua fresca

Los Parados may be the hardest for gringoes to navigate. The staff’s English is limited, and, when we went, the lights weren’t even on in the dining room. The menu is big, but many items on the menu weren’t available. Out of six tortas, they only had one. While they have no alcohol, the drink to order is the agua fresca, a melon puree that’s served in a mini-pitcher with a straw (free refills!). Muy fresco. In addition to pastor, they have cabeza (head), carnitas (beef), lengua, tripa (beef intestine), and asada (steak) tacos that are all delicious. If you’re in the market for an adventure, this is the place for you.

There’s a sizable Brazilian community in Goose Creek, but instead of Brazilian food, we found La Malquerida. Orders are placed outside, paid for inside, and eaten outside. Inside is a butcher counter, a tienda, and a computer repair shop. The al pastor and steak tacos here are on point. The sauce on the side is some sort of lime/tomatillo magical concoction. The owner has a Taco Truck he’s named La Malquerida (The Unloved) because one of his competitors accused him of operating illegally, but everything is legit and inspected. Check this place out on a nice blue-sky weekend.

Up in Summerville, El Alteno operates as both a taco truck and a Mexican restaurant where you can order and eat inside, but all the food is made in the truck. Taco choices include al pastor, cabeza (beef cheek), and nopales (cactus). Everything was awesome, but the cactus are refreshingly different with their tangy pickled flavor.

Want to join the discussion?
Feel free to contribute!

This site uses Akismet to reduce spam. Learn how your comment data is processed.

CityPaper :: The Monks of Mepkin Master the Art of Farming Fungi
Scroll to top